The workweek will start on a cloudier and wetter note. An upper-level storm currently positioned over Colorado will sweep east across the area on Monday. With little to no instability, thunderstorms aren’t really expected. Temperatures will be mild with morning lows in the low 50s and daytime highs in the mid to upper 60s.

The next chance for rain will quickly follow with a cold front moving in from the northwest on Tuesday. Skies will be mostly cloudy throughout the day with humidity and temperatures running a little higher. This will lead to higher instability. Wind energy isn’t all that strong, but will ramp up some by early evening as the cold front is pushing across Southern Missouri. This will help to organize thunderstorms. Some severe weather looks possible with large hail and strong wind gusts in the stronger storms. The tornado potential isn’t zero, but will be low with winds generally out of the same direction in the atmosphere and winds remaining on the weaker side near the surface.

Rain amounts will be on in the half an inch to inch range with some spots picking up over an inch.

Wednesday will be a bit cooler with gusty winds out of the northwest. Skies will become partly cloudy with a slight chance for a few showers. Temperatures will warm into the low to mid 60s.

A front will edge south into the area by Sunday bringing scattered showers and thunderstorms back to the area.

70°F A stray shower or thunderstorm is possible early. Partly cloudy skies. Low around 70F. Winds S at 10 to 15 mph.

69°F Widely scattered showers or a thunderstorm this evening. Then partly cloudy. Low 69F. Winds SSW at 5 to 10 mph. Chance of rain 30%.

A line of severe storms is diving south this morning with the potential for 70 mph winds. Your early morning commute will be storm with heavy rain, lightning, and gusty winds. Be careful! See the latest watches/ warnings on Meteorologist Elisa Raffa's Twitter and Facebook pages.

After a stormy start, we'll be warm and humid this afternoon with highs in the middle 80's again. A few redeveloping storms are possible, but most of us should stay dry. The morning round of storms will likely use up all the fuels for afternoon development, leaving us with little to no coverage in storms later.

Rain chances have returned to the area and there's been quite a bit of scattered shower and thunderstorm activity over South Central Missouri and North Central Arkansas. This activity will fade early this evening as temperatures begin to cool. It looks like it will also generally stay east of Hwy. 65, but an outflow boundary on the western edge could trigger some isolated showers and thunderstorms near Hwy. 65.

Another area to watch will be closer to Central Missouri. A front moving in from the north is expected to trigger scattered storms along the front. A Severe T-Storm Watch has been issued for Central Missouri through 10 pm. Large hail and damaging wind gusts are possible with the stronger storms.

We're starting out warm and muggy this morning. We'll stay summery this afternoon with highs in the middle 80's under a mix of sun and clouds.

Storm chances return today as a front presses in from the north and an upper-level hiccup squeezes in from the south. It looks like some spotty storms will be possible this afternoon. The forecast then gets messy and there are issues with timing and placement of storms for the evening hours.

Trump administration moves to block Chinese airlines from US

Vaping is on the decline among youths in Greene County

The governor explains the role of the National Guard in Missouri 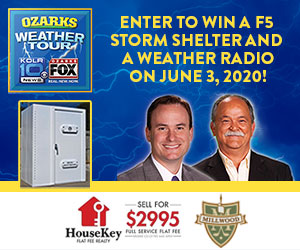 Juvenile suspect in custody after 3-car fire, caused by crash in Springfield