The heavy rain is over, but patchy drizzle will continue overnight. Rain totals ranged from nearly 2″ north of Hwy. 54 to under a half an inch south of the state line. Springfield picked up about an inch of rainfall.

We’re on the colder side of the storm now. Patchy drizzle will continue throughout the night, mainly near and north of the interstate. Temperatures will settle into the mid to upper 30s north to upper 30s to low 40s south.

Drizzle and showers will increase from the northwest late Tuesday afternoon. As surface temperatures cool during the early evening, a quick changeover to snow showers is expected. The transition to snow will make it into Northern Arkansas by early morning Wednesday. The snow showers will continue through sunrise before tapering off to flurries that will linger longest near and north of the interstate.

Snow totals will be heaviest north of Hwy. 54 where amounts over an inch are expected. South of there amounts will be in the dusting to 1″ range with the lighter amounts across areas closer to the state line. With this scenario, there could be some isolated higher amounts of over an inch favoring areas near and north of the interstate.

Temperatures Wednesday night will settle a little below freezing, leading to the risk of slick spots Wednesday morning. Roads should improve quickly during the morning Wednesday after the sun comes up.

Clouds will be slow to clear Wednesday afternoon, especially near and north of the interstate. Afternoon highs will be in the low to mid-30s where clouds are slowest to clear with mid to upper 30s elsewhere.

A cold night will follow as skies clear and winds become light. Temperatures will slip into the upper teens and low 20s by Thursday morning and could be a bit colder over areas that have snow cover.

The remainder of the week will feature more of a northwest flow aloft with the trough in the Eastern U.S. Clippers will dive southeast across the area Thursday and Friday generating periods of clouds and a slight chance for rain or snow showers. Temperatures look warmer though with highs in the mid to upper 40s.

Saturday will be the transition day as the trough in the East begins to head out as the pattern begins to flip. Mostly sunny skies will warm temperatures into the low 50s. Sunday looks even warmer, but with more clouds. There will be a chance for showers by the end of the day. The cloud cover will dictate how warm we get, but it looks like afternoon highs will be in the mid to upper 50s.

A trough developing in the West by Monday will lead to a mild first half of next week. The pattern also looks stormier with a chance for heavy rain centered around Tuesday. We’ll have to keep an eye on instability levels too with a chance for some stronger storms Tuesday as well.

We're starting to shake off the chill from this past weekend. Temperatures today have slowly recovered after a cold Saturday where temperatures never made it out of the low 40s. Winds have shifted to a more south to southeast direction and this is bringing milder air back into the area. Temperatures slowly climbed throughout the day today despite mostly cloudy skies, and managed to get close to 60°.

For tonight, we'll hang onto mostly cloudy skies with temperatures not falling much. Lows in the upper 40s to low 50s will be common. Southeast winds will pick up overnight.

Sunday will be warmer with temperatures topping off in the lower 60's if clouds can clear out. If clouds stick around, temperatures will be stuck in the 50's. Maybe a shower or two are possible during the afternoon hours but we are not looking at widespread rain chances. Overnight lows will drop into the lower and middle 50's.

Monday temperatures will continue to soar into the lower 70's under mostly cloudy skies. There are rain chances in the afternoon but we are not looking at a washout day. Not everyone will see rain Monday either. Overnight lows will drop into the upper 50's and lower 60's.

Clouds stuck around and temperatures really struggled to get out of the 30's and 40's today. They won't budge too much tonight but a big warm-up is coming this week. A few rain chances are also possible.

MSU graduation postponed due to COVID-19 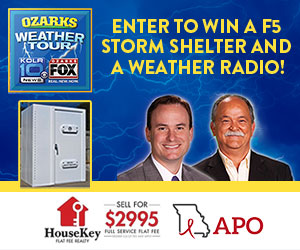