Spring has battled back after a setback over the weekend. Southwest winds and a bit more sunshine pushed afternoon temperatures into the 70s today. The warmth came with a noticeable increase in humidity too.

The warmer pattern will hang around a few more days with temperatures topping the 80° both Tuesday and Wednesday.

Morning clouds on Tuesday will give way to partly cloudy skies and highs around 80°. A cold front will approach the area by Tuesday evening with a few spotty storms possible near the front. Storm chances look highest from Warsaw east toward the St. Louis area. Wind energy levels won’t be terribly strong, but there will be quite a bit of instability and this could lead to a few isolated severe storms capable of producing large hail and gusty winds.

Storm chances look a bit higher on Wednesday as a stronger cold front moves in by Wednesday evening. Temperatures on Wednesday will warm into the low to mid 80s with a bit more wind energy to organize storms. Widely scattered storms are expected to develop near the front late in the day before moving out late in the evening. Storms will be most likely east of Hwy. 65 with large hail and damaging winds possible.

Cooler weather will move in by Thursday and will hang around into the weekend. Skies look partly sunny on Thursday with mostly sunny skies on Friday. Temperatures may get cold enough Friday morning for some patchy frost. Afternoon highs will be in the upper 50s.

The pattern is a cold one for April next week with a trough set up over the U.S. The intensity of the cold is still in question, and the overall setup may make for cloudier skies that would help temper how cold the overnights can get. It’s still a pattern worth watching. Be prepared for the possibility of freezing temperatures next week just in case.

Well, it was hot and humid today with temperatures in the lower 90's and feel-like temperatures in the upper 90's! Wash, rinse, and repeat for Sunday before the remnants of what is now Tropical Storm Cristobal impacts the Ozarks Monday night into Tuesday.

Overnight tonight temperatures will be in the lower 70's with warm and muggy conditions under mostly starry skies.

A new era at the Springfield Greene County Library 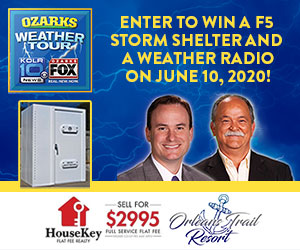