SPRINGFIELD, Mo. — The St. Louis Cardinals will report to spring training next week.

The minor league guys will be right behind them as they get ready for the 2019 campaign.

The AA Springfield Cardinals will have a new manager.

Today, Joe Kruzel met with reporters and the fans as he checked out the facilities at Hammons Field.

Kruzel takes over for Johnny Rodriguez who managed the last two years.

Kruzel is 53 years old and is in his 12th season with the Cardinals, he’s managed the last seven years.

Last season he was at short season Low-A State College and is looking forward to AA.

More than that, he’s excited to get his chance in Springfield even if the area gave him a harsh welcome weather wise.

“Well, I didn’t assume that there was going to be a tornado on my first day,” Kruzel said. “But other than that, everything that I’ve seen so far in talking to all the people around, the front office people, Dan and Scott, everybody else around is it’s exactly what I’ve heard. I’m really excited to be a part of it. I really am.”

(CBS SPORTS).- The 2020 Masters, pushed to Nov. 12-15 amid the COVID-19 pandemic, will be held this fall without patrons or guests allowed on the grounds, Augusta National Golf Club announced Wednesday.

"Since our initial announcement to postpone the 2020 Masters, we have remained committed to a rescheduled Tournament in November while continually examining how best to host a global sporting event amid this pandemic," said Augusta National chairman Fred Ridley. "As we have considered the issues facing us, the health and safety of everyone associated with the Masters always has been our first and most important priority.

LAKE BUENA VISTA, Fla. – The Phoenix suns found a touching way to announce the starting lineup before Tuesday's game – they let family members introduce their loved ones from home.

The pregame ritual might have escaped notice outside of Phoenix in normal times, but these are not normal times.

College football chaos: Who is playing and who has canceled?

With no centralized leadership over college football, each conference can make its own decision about whether to move forward.

Three temporary license offices to open in Missouri, one in Springfield

How to protect your house from falling trees and branches

Construction on Sunshine Elementary not finished, students moved to Portland 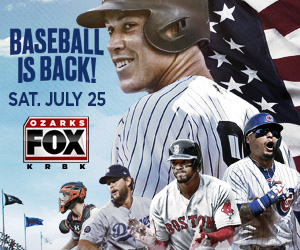 Three temporary license offices to open in Missouri, one in Springfield