Morning rain and thunderstorms took a lot of the punch out of the atmosphere.  A cold front will slowly sink southeast across the area this evening, triggering a few showers and thunderstorms.  The showers should fade around midnight tonight with partly cloudy skies holding on through the morning.  Temperatures will be pleasant, falling into the low to mid-60s.

Morning clouds will give way to sunnier weather during the afternoon.  Temperatures will be marching higher too with afternoon highs in the mid-80s.

The pattern looks drier into Saturday, but we’ll have to keep an eye on possible storm development to the northwest Thursday evening.  If storms are able to develop, they would likely drop southeast into the area late Thursday night into Friday morning.  Some heavy rain and gusty winds would be possible.

The rain would quickly fade Friday morning with skies becoming mostly sunny.  Temperatures will soar with afternoon highs in the upper 80s northeast to low 90s southwest.  For many, this would be the first round of 90° temperatures, and it would fall on the official arrival of the summer season.

Friday night into Saturday should remain quiet.  It looks like we’ll be in for more hot and sticky weather on Saturday.  A few isolated afternoon showers and thunderstorms look possible.

The pattern will turn stormier again Sunday into Monday as a trough in the West edges east.  A front will slowly edge southeast into the area by Monday.  This will set the stage for episodes of showers and thunderstorms Sunday into Monday.  The pattern would tend to favor rain and thunder late at night into the morning Sunday with the next main round Sunday night into Monday morning.  This means much of the late morning and afternoon will be pretty quiet.  Temperatures will also be a little cooler with highs in the low 80s.

A ridge will begin to build across the midsection of the country starting Tuesday.  Afternoon temperatures will head higher with highs in the mid to upper 80s Tuesday into Wednesday.  Tuesday looks dry, but a few isolated showers and thunderstorms will be possible Wednesday afternoon.

Lake Report: May 29th, Lake of the Ozarks

Football returns to the Ozarks amid state re-opening

WTT, Lasers off to the Greenbrier

Getting back in the game

Diestelkamp gives back to the next generation

SPRINGFIELD, Mo. -- An interaction that took place in Springfield between protesters and police officers ended in a handshake.

During the course of Springfield's third protest against police brutality on May 31, some protesters began spray painting the road.

PULASKI COUNTY, Mo. -- Fort Leonard Wood reported 70 of their soldiers and trainees tested positive for COVID-19 on Sunday, May 31.

Upon arriving at Fort Leonard Wood, all soldiers were medically screened and all test results, at that time, came back negative. However, a few weeks after those test results a trainee went to the health facility showing symptoms, prompting every soldier to be retested.

Update: Mansfield Police say all is clear after someone found a suspicious device.

A passerby found a silver pipe that looked like it had a fuse. 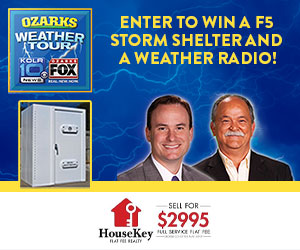