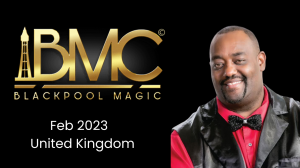 Dewayne has been invited to lecture and lay out various marketing tactics and techniques he has used to make him one of the most sought-after corporate entertainers for conferences and events as well as ways he has leveraged social media to increase his appearance fees. Dewayne has shown consistent results with booking in excess of more than 100 appearances per year since 2014 and even during the COVID in 2020 with virtual performances that earned him an article in Forbes magazine.

Blackpool Magic Convention is an amazing gala show for world-class performers, star lecturers, and an extensive Dealers Hall. Blackpool Magic Convention promises a world-class lineup of international, award-winning magicians, illusionists, and acts brought together in one fantastic venue to provide a weekend like no other. Blackpool earned a place in the Guinness Book of World Records for hosting the largest magic convention and is considered to be one of the most prestigious magic conventions in the world.

Dewayne Hill has been performing for over 20 years of stage rocking & crowd-pleasing experience. Dewayne was voted best entertainer in 2021 and 2022 (back to back) and best magician in 2022 with runner-up of stand-up comedian.

In 2022 he was nominated best filmmaker for his thriller/action in which he was the producer and director for the film "The Discernment, The Book of Evil" which was nominated and won several awards on the film festival circuit.

Another episode of #howdidyoudothat by Corporate Comedy Magician Dewayne Hill